“At exactly 6.14 pm, this evening, after the inauguration of the 9th assembly, I was invited to collect my certificate and I have just come to collect it.

“I take it to be God’s time. I believe that justice delayed is justice denied, but all the same for the sake of our nation, I accepted it, ” he said. 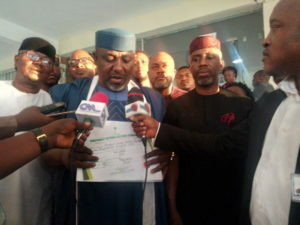 Okorocha commended the judiciary for doing the needful and for being there at the needed time as well as serve as the last resort for the common citizens or anybody that felt oppressed.

“I also want to thank INEC for taking this bold step against all odds by issuing my certificate of return, which goes a long way to confirming that the allegation of duress is unfounded by a delay tactic by my detractors to slow down the process.

“I believe this is God’s time and I take it as God’s time. I am happy that finally the matter is resolved.

Asked of his feelings about not being able to participate in the inauguration ceremony for the 9th assembly and the voting process that produced the leadership of the 9th Senate, Okorocha said:” I missed it because I did not have a certificate.

“I belong in the APC and I believe there is nothing wrong with the party but its management.

” I will not stop being an APC member because of somebody. I came into APC alone and I am in the party. I believe in the party. It will be good to say that time will tell,” he said.

He said that he came to the senate to rebuild the political bridges and the rest of the country.

“I have also decided to see the possibility of free education at all levels in Nigeria, so that ordinary people, the poor can have access to education,” okorocha said.

Okorocha was one of the two senators absent at the inauguration of the 9th assembly, where 107 other senators elected Sen. Ahmed Lawan as Senate President and Ovie Omo-Agege as Deputy Senate President, both of the All Progressives Congress (APC).

INEC did not give Okorocha his certificate of return following an allegation that the Returning Officer of the Commission declared him winner of the election under duress.

ALSO READ: 5 Things we learnt from inauguration and election of 9th Senate

The Federal High Court in Abuja , however on Friday ordered INEC to issue him a Certificate of Return as senator-elect representing Imo West Senatorial district.

Justice Okon Abang in his ruling on Friday, held that the commission had no reason to withhold the former governor’s certificate, having won the election.

El-Rufai: ‘After 8 years of Buhari, presidency should return to the South’

Suregist - February 15, 2019
0
When they start insulting and saying nonsense why did she try to kill herself and co she might be more sad and find another...

Suregist - February 16, 2019
0
What is the university turning into as mysterious things has been occuring in the university. First it was the girl who attempted suicide then...

Suregist - February 15, 2019
0
A Babcock University declared her Father dead by customising a tee shirt with her fathers picture on it all to gain access to leave...

ABOUT US
Sure gist is a website different from others created to make you love information and news. ...Your world of NEWS. Email us to suggest or advertise
Contact us: suregisting@gmail.com
FOLLOW US
© Created by Dolce Inc. - 07089505236
MORE STORIES

Lagos APC chairman explains why Ambode did not get second term...